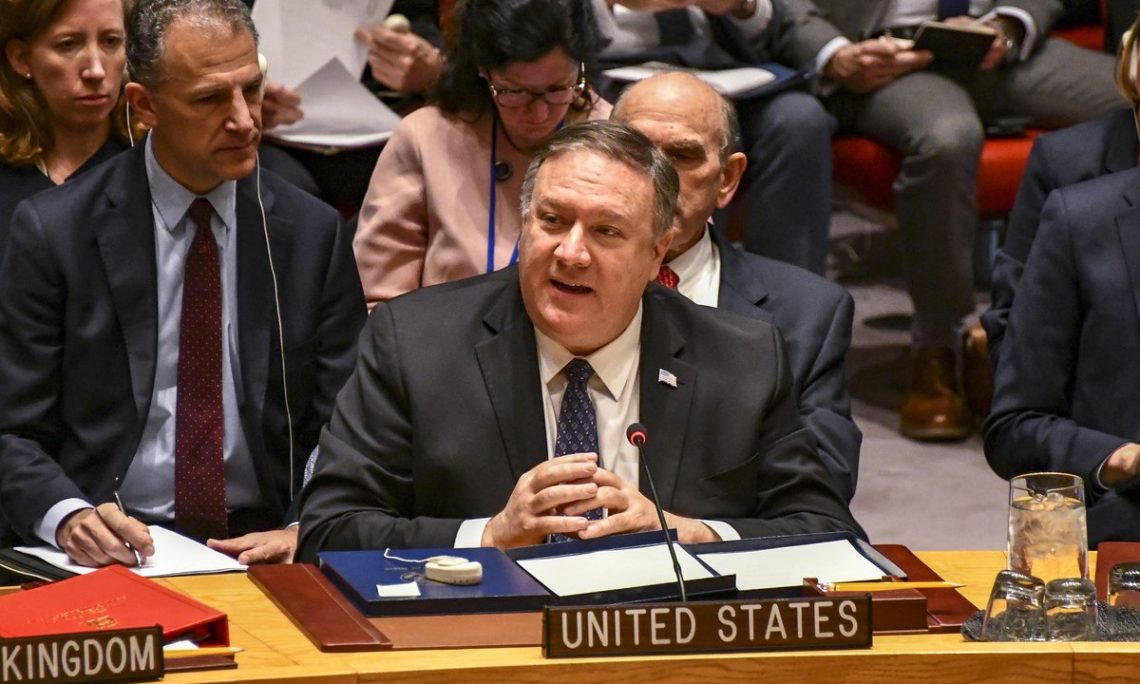 SECRETARY POMPEO: Good morning. On behalf of President Trump and the American people I first want to thank Foreign Minister Miguel Vargas of the Dominican Republic, the current president of the Security Council, for scheduling this meeting. My former colleague, Ambassador Haley, lobbied for a year to get the council to address Venezuela but her pleas fell
on deaf ears. This meeting is long overdue. And you all know why it’s overdue.

Take Carlos Aquino, a 37-year-old construction worker, weeping over the tiny coffin of his deceased infant son who had died of starvation. Such scenes of misery are now the norm in Nicolas Maduro’s Venezuela where millions of children are suffering from malnutrition and starvation thanks to a socialist experiment that caused the economy to collapse. This human misery isn’t a secret. Stories like this one are well documented by our press corps. You can read about men like Carlos every day. People like him are why the United States has called this meeting.

We’re here because Maduro has reduced ordinary Venezuelans who once lived in prosperity to rooting through dumpsters to find something to eat.
We’re here because scores of Venezuelan women, some of them teenagers, have fled Maduro’s madness to other countries, and in desperation turned to prostitution to survive. We’re here because of Maria Vielma, a school psychologist who said through tears, “We have a government that is dedicated to destroying, not to constructing.”

Another man, a farmer named Vladimir Sequera, who never got more than a sixth grade education but he hoped that his stepdaughter Gabriela could fulfill her dreams of being a lawyer – she now says, “Our whole future has been taken away.” That future, for her and all Venezuelans, didn’t magically disappear on its own. The Maduro regime’s failed policies, oppression, and corruption stole that future.

The United States is helping to recover a brighter future for Venezuela. We’re here to urge all nations to support the democratic aspirations of the Venezuelan people as they try to free themselves from former President Maduro’s illegitimate mafia state. The humanitarian situation demands action now; it demands action today. Today nine out of ten citizens live in poverty. Millions lack access to drinking water and food. Three out of four hospitals have been abandoned. Three million Venezuelans have been forced to flee their homeland thereby flooding the region and threatening international peace and security.

Maduro’s prisons are full of political prisoners unjustly behind bars and the graveyards hold dissidents and protesters that have been killed by this regime. I want to talk to you about just one of them, a member of the city council of Caracas named Fernando Alban. Just four months ago he came here to this city to meet with the world’s representatives who gather here every year during the United Nations General Assembly. He came here to speak about the failures of the Maduro regime and about his hopes for a more democratic and a more prosperous future for his country.

After that he went home. He went home to the country that he loved. Maduro’s secret police arrested him at the airport as soon as he landed. He died in their custody three days later and the pathetic explanations for this death have convinced absolutely no one. The time is now to support the Venezuelan people, to recognize the new democratic government
led by interim President Guaido, and end this nightmare. No excuses.
The United States stands with the Venezuelan people. So far, many other nations have chosen to do the same and they too have recognized the legitimate government of interim President Guaido. The United States stands proudly with you as we stand together in support of Venezuela. You knew the Venezuelan people did not have a moment to spare.

And now it’s time for every other nation to pick a side. No more delays, no more games. Either you stand with the forces of freedom or you’re in league with Maduro and his mayhem. Some countries have publicly taken former President Maduro’s side. China, Russia, Syria, and Iran are just four of them. Just this morning we tried to find a way for this council to speak in
one voice in support of the Venezuelan people and the democratic ideals through a presidential statement on this council, but our Russian and Chinese colleagues refused to let this move forward. It’s not a surprise that those who rule without democracy in their own countries are trying to prop up Maduro while he is in dire straits. Nor are these countries supporting international norms as they cynically claim. China and Russia are propping up a failed regime in hopes of recovering billions of dollars in ill-considered
investments and assistance made over the years. This money was never intended to help the Venezuelan people, it lined the pockets of the Maduro regime, its cronies, and its benefactors. But no regime has done more to sustain the nightmarish condition of the Venezuelan people than
the regime in Havana. For years, Cuban security and intelligence thugs, invited into Venezuela by Maduro himself and those around him, have sustained this illegitimate rule. They havetrained Maduro’s security and intelligence henchmen in Cuba’s own worst practices. Cuba’s interior ministry even provides a former – provides former President Maduro’s personal security. Members of this body often use their microphones here to condemn foreign interference in internal affairs. Let’s be crystal clear: the foreign power meddling in Venezuela today is Cuba. Cuba has directly made matters worse and the United States and our partners are the true friends of the Venezuelan people.

On Wednesday, the Venezuelan people chose to take their country back on the anniversary of the day the dictator Marcos Jimenez Perez was forced out of power back in 1958. We call for Venezuelans to work now together to peacefully restore the constitutional government and return the country to a secure, democratic, and prosperous path. As we read reports of peaceful Venezuelan protesters killed or wounded, we also repeat our insistence that
Venezuela’s security services show restraint. And I want to be 100 percent clear: President Trump and I fully expect that our diplomats will continue to receive protections provided under the Vienna Convention. Do not test the United States on our resolve to protect our own people.

We hope that the international community will support the people of Venezuela and the transitional government led by Juan Guaido. On January 23rd, Guaido declared himself interim president of Venezuela in accordance with Venezuela’s own constitution. He made this declaration with the full support of the National Assembly and of the Venezuelan people. Our
nations must stand up for the rule of law and support the leader who the Venezuelan people have affirmed as their legitimate interim president. It is our hope that free and fair elections happen as soon as possible.
Back in 1961, President Kennedy spoke in Caracas. He declared, “We will be partners in building a better life for our people.”

America’s ambition has not changed since that day. We stand with the Venezuelan people as they seek to build a better life for themselves and we cannot ignore the suffering or tyranny taking place in this proud nation. Neither should other countries who care about freedom and prosperity.
Today we call on all members of the Security Council to support Venezuela’s democratic transition and interim President Guaido’s role in it.