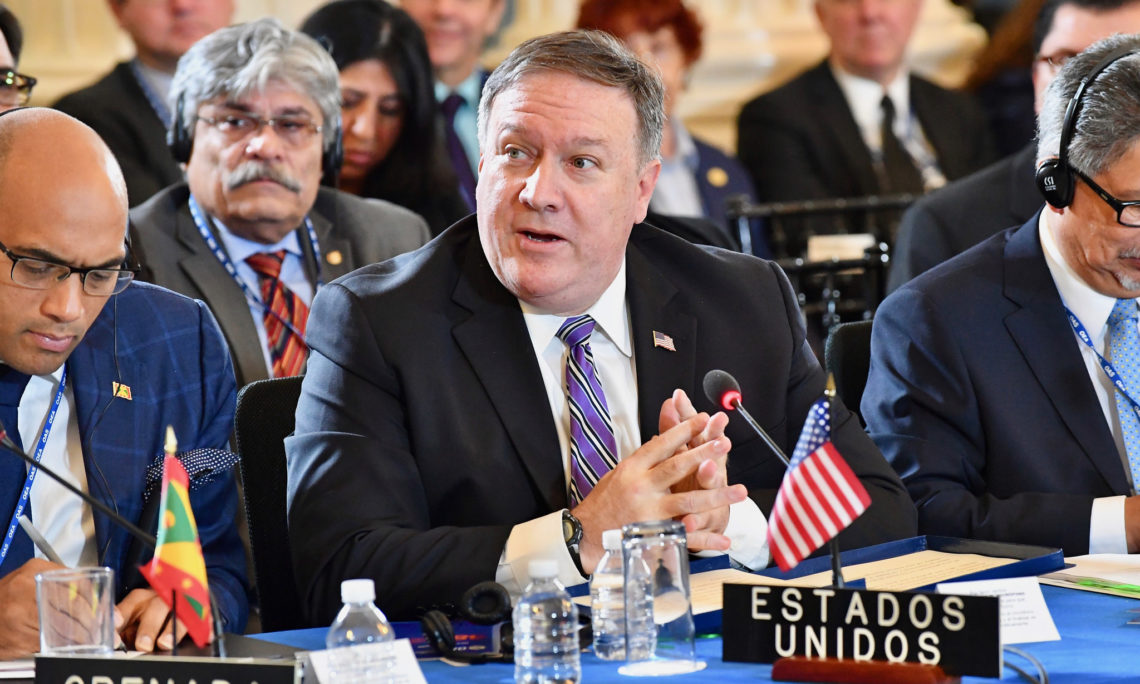 June 4, 2018
SECRETARY POMPEO: Thank you. Thank you, Secretary General Almagro and your team, for organizing this 48th General Assembly of the OAS. We are incredibly grateful for your leadership.It is a pleasure to be here at the OAS for the first time as Secretary of State of the United States of America, and I am delighted to meet many of my fellow foreign ministers here and today.

I would also like to acknowledge the great work of our permanent representative, Ambassador Trujillo, and his team, and – as well as all of those – work of the perm-reps to the Organization of American States.

Before I continue, I’d like to express our solidarity with the Guatemalan people and send our condolences to the families and loved ones of those who perished as a result of the volcano eruption in Guatemala on Sunday.

Just as we did when this first body met 70 years ago, the United States continues to place a great deal of value on the OAS and its role in forging a hemisphere distinguished by democracy, peace, respect for human rights, and cooperation. We must all do our part to strengthen the OAS to deal effectively with the challenges to our values we face together today and, of course, those we will face in the future.

I would like to thank our fellow member-states for their support of a decision at last year’s General Assembly to reduce the OAS’s dependence on a single member-state: mine. This is an important step rooted in increasing buy-in and burden sharing to achieve our shared goals. This year I hope that we can agreeably adopt a plan to implement this decision in order to put the OAS on more sustainable financing footing.

As for confronting shared challenges in the region, at the Summit of the Americas our leaders agreed upon steps to combat corruption, a cancer that eats away at the underpinnings of democracy and stifles the dreams of our citizens. We must continue to improve transparency in government and public procurement, and call out and prosecute corrupt officials.

Transnational criminal organizations kill our people, they destabilize our societies, and they challenge our democratic institutions. The United States will not stand for this. We will continue to cooperate with our Mexican counterparts and with leaders from the Northern Triangle to build on our gains in addressing the drivers of illegal immigration and the illicit trafficking.

Our fight to crush these TCOs will continue with the implementation of the Caribbean Basin Security Initiative. We will also continue to pursue Caribbean 2020, our strategy-focused – our strategy for enhanced Caribbean engagement in the areas of security, diplomacy, prosperity, energy, education, and health.

The natural disasters of the past year have tested our people’s resilience. The United States is proud to help OAS countries bounce back in the aftermath of such tragedies. One way we are doing this is helping small businesses in the vital Caribbean tourism industry get back on their feet again after hurricanes.

In Cuba today, we see an expectation that change is inevitable and that it can’t come quickly enough. Young Cubans born under a dictatorship are uninterested in hollow revolutionary slogans. They demand educational opportunities free from political constraints or a totalitarian regime’s repression. They want what youth everywhere else wants: opportunities to use their talents, to exercise their voice, achieve their potential, and build a bright future for themselves. As democratic societies, we must support young people in Cuba and elsewhere in the hemisphere in their hopes for democratic change.

In Nicaragua police and government-controlled armed groups have killed dozens, merely for peacefully protesting. I echo what Vice President Pence said in this very building on May 7th: “We join with nations around the world in demanding that Ortega Government [respond] to the Nicaraguan people’s demands for the democratic reform and hold accountable those responsible for violence.” The United States supports the work of the Inter-American Commission on Human Rights and what it is doing in Nicaragua, and strongly urges the Nicaraguan Government to implement the recommendations issued by the commission this past May 21st.

But there is no greater challenge today than the full-scale dismantling of democracy and the heartbreaking humanitarian disaster in Venezuela. While the United States welcomes the release of the unjustly imprisoned Holt family, our policy towards Venezuela remains unchanged. The United States stands steadfast in support of the Venezuelan people and their efforts to return to democracy. The Maduro regime’s efforts towards – to move towards unconstitutional government and its human rights abuses are now well known by all. All these actions have, among other ill consequences, resulted in an unconstitutional alteration of Venezuela’s constitutional order.

Given these circumstances, we are all challenged to act under the Inter-American Democratic Charter, which this body has already begun to do.

On more than one occasion, Venezuela has squandered opportunities to have the kind of dialogue that the charter calls for. We seek only what all the nations of the OAS want for our people: a return to the constitutional order, free and fair elections with international observation, and the release of political prisoners. The regime’s refusal to take meaningful action on these issues has demonstrated unmistakable bad faith and exhausted options for dialogue under current conditions.

Just two weeks ago, the Venezuelan Government staged sham elections that offered no real choice to Venezuelan people and its voters. Many of them responded sensibly by simply staying home.

For all of these reasons, Vice President Pence challenged member-states last month to do what the Democratic Charter asks of us when faced with an unconstitutional interruption in democratic order of a member-state: suspend Venezuela from this body.

That suspension is not a goal unto itself. But it would show that the OAS backs up its words with action. And it would send a powerful signal to the Maduro regime: Only real elections will allow your government to be included in the family of nations.

In addition to suspension, I call on fellow member-states to apply additional pressure on the Maduro regime, including sanctions and further diplomatic isolation, until such time as it undertakes the actions necessary to return genuine democracy and provide people desperately needed access to international humanitarian aid.

We call on all OAS nations to do this today regarding Venezuela, and in the future, wherever necessary, for good of the region and the world. Thank you. (Applause.)