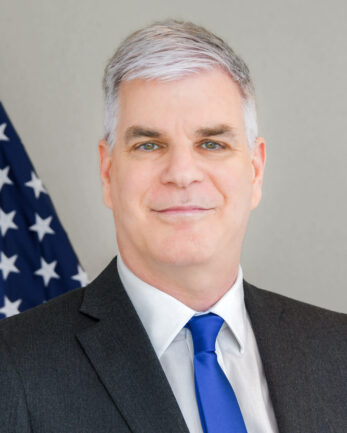 Marc Ostfield presented his credentials as U.S. Ambassador to Paraguay in March 2022. A career member of the U.S. Government’s Senior Executive Service, Ambassador Ostfield has served in leadership roles in the U.S. Department of State since 2002; previous positions include serving as the Department’s Ombudsman; Acting Director and Deputy Director of the Foreign Service Institute; Director of the Office of Policy and Global Issues in the Bureau of European and Eurasian Affairs; Senior Foreign Affairs Officer for the Office of Science and Technology Cooperation; and Senior Advisor on Bioterrorism, Biodefense, and Health Security in the Office of International Health and Biodefense.  From 1987-2002, Ambassador Ostfield created and led large-scale USAID, U.S. Centers for Disease Control and Prevention, and other donor-funded HIV/AIDS and global health programs in the United States, Latin America, and worldwide.

Ambassador Ostfield has published and presented extensively on foreign policy, national security, and global health, and has taught group dynamics and leadership development.  He has received numerous professional, academic, and community service honors, including the Presidential Rank Award; the U.S. National Counterterrorism Center’s Meritorious Unit Citation; multiple U.S. Department of State Superior Honor and Meritorious Honor Awards; the Diplomacy Fellowship from the American Association for the Advancement of Science; the Jacob K. Javits Fellowship from the U.S. Department of Education; and the President’s Volunteer Service Award as a volunteer firefighter since 1995.

He and his husband, Michael, have spent years as volunteers with first responder, human rights, governance, and arts organizations.