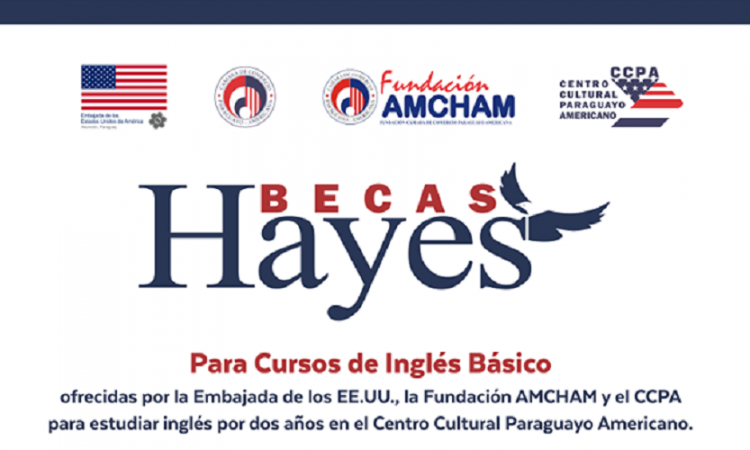 Representatives of the US Embassy, ​​along with representatives of the companies of the Paraguay-American Chamber of Commerce and the Paraguayan-American Cultural Center (CCPA), will participate in the ceremony of graduation of 109 outstanding Paraguayan youth, beneficiaries With the scholarships of English Hayes. The event will be held on Thursday, February 23 at 7:00 pm. At the Teatro de las Américas of the CCPA (José Berges297 e / USA and Brazil). After the event, the guests will share a toast with those present.

About the Hayes Scholarship Program

The Hayes Scholarship program consists of intensive English courses aimed at third year students and / or university students. It lasts for two years; Classes are held at the headquarters of CCPA Central and San Lorenzo.

Through this initiative, the Embassy of the United States and the partners of AMCHAM and the AMCHAM Foundation, in agreement with the CCPA, support the promotion of young students, who, despite their economic limitations, stand out for their effort and dedication And And not only for a training of bilingual university students, but also to become future leaders committed to improving their communities and Paraguay.

Also, since 2006, the English Embassy Program of the US Embassy. Has awarded more than 2,200 scholarships to outstanding students and professors of public schools and future English teachers, including 8 young people currently pursuing their university studies in the United States thanks to the Opportunity Funds program as well as 5 other students are beneficiaries of the Fulbright Scholarship For postgraduate studies.

It is worth mentioning the support of civil society organizations and educational institutions to which several of the fellows belong, and particularly the valuable support of the Paraguayan-American Cultural Center, without whom this undertaking could not be carried out, strengthening the ties between countries and Institutions, forming future leaders for the country.